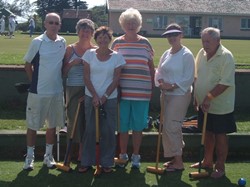 Sezela Croquet Club was started in November 2011 as a wing of the popular Sezela Bowling Club, situated close to Pennington on the KwaZulu Natal South Coast. Some basic equipment was acquired and a handful of prospective players got started. The bowling club has two greens and half of the second green was measured out and set up as a croquet court. Steve Stevens, who initiated the idea, started coaching people in the basics and right from the start it was agreed that the Golf Croquet format would be played.

The club initially played on a Wednesday afternoon but, in late 2013 this changed to Wednesday morning, which has worked out very well. At the end of January 2014 Steve sadly left Pennington and moved to Howick, and the organisation of the croquet was taken on by Jacquie Stafford.

At present the club has about eight regular players and a few others who play occasionally. The weather is a problem January to March as it gets really hot and humid and some of the players find the heat too much (this also happens in other sports in our part of the country). Membership is expected to increase once we head into Autumn.

Green fees are R10 per morning and visitors are welcome to come and play at no charge, to see what the game is about. 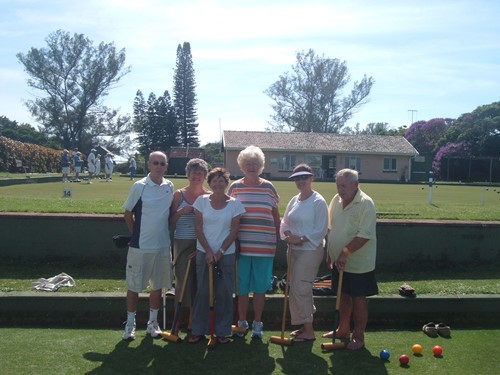 Some of the regular players, from L to R John, Olive, Jacquie, Olive, Nicola, Ole