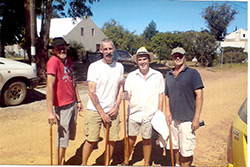 Greyton Country Croquet Club started with a few friends David Kuijers, Barry Wiesner, Tim Quinlan and Doug Murray getting together on a Friday or Saturday afternoon and playing a version of Country Croquet devised by themselves and suited to their rather irregular lawns. The venue alternated between Dave’s and Barry’s lawns.
It has since evolved into a more formal game played on the slightly larger courts laid out on a newer member, Mike Goulding’s lawn. New members have been attracted and membership grew to 9 with the addition of Dave Herring, Ronnie Morrison, Jeremy O’Regan, Mike Goulding and Nick Downing.

Although the lawns are bigger they are still only about 10m x17m and kikuyu based. But they allow us to play “proper” Golf Croquet to WCF rules at least once, and sometimes twice, weekly. With an occasional reversion to a game or two of “Country Rules”.

At an Open Day held on 18th May, much interest was shown by the local community with thirty odd people (interpret that how you wish) turning up and we have a potential 10 further members, some of whom include some long awaited women folk.

Although there is no formal club membership at present, a committee has been elected and we have been formally affiliated to WPCA.

Three of our members are involved in coaching local school children and 10 children are coached on Monday afternoons.

We have recently officially received notification from the TWK Municipality that our land application for a piece of land adjacent to the Bowling Club has been successful.

Two very successful open days have been held to boost membership and raise funds. The second in 2014 at the lovely Oaks Estate was attended by over 100 people.
GCCC has coached the children of Greyton House too, but without anywhere to play until the formal lawns are constructed, this has been put temporarily on hold.

Despite not having proper lawns the GCCC has over the years fared remarkably well in competition at both national and provincial levels.
Membership has continued to grow, to include active members Nick Downing, June Grinton, Mieke Erasmus, Caleb Henderson, Dave Hughes, Denis Turnbull, Hedley Daniels, and Mike Moore (country member).
Many other members have come and gone but many still retain connections to the club. Denis and Barry are co–captains of the club, leading the team to its best season yet in the Western Cape Robinson Cup tournament. GCCC are currently holding strong in fourth place, having finished last in the two previous seasons! Denis holds the title of BOSS Champion for 2016 (Best of Season Singles) for the Western Cape.

Not wanting to impose on the generosity of Mike’s back yard, the club temporarily played on the Uitkyk school fields, but this proved to be a difficult problem, so the members have resorted to back yard play again until the first lawn is laid. Land has been leased from the Theewaterskloof Municipality (TWKM) alongside the bowling club. As it is below the flood line it cannot be built on, but is suitable for croquet lawns.
TWKM has been very supportive in both helping the club get material for the platform needed and in clearing the land, and generous members have given both time and money.

We had some very good action yesterday thanks to the horses, the front end loader and the operator! I would estimate that the Base Foundation for the croquet lawns is about 75% to 80% completed. When this foundation is done, we can then think about sand and irrigation but then we will need a lot of Rand to proceed ON. Denis Turnbull Chairman GCC 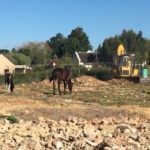 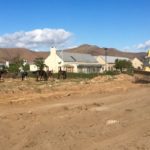 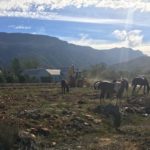 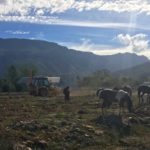 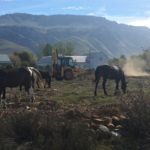 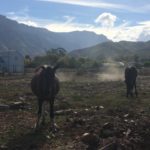 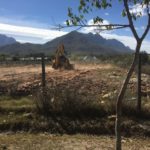 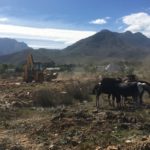 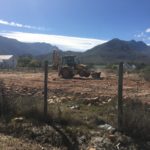 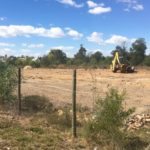 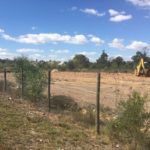