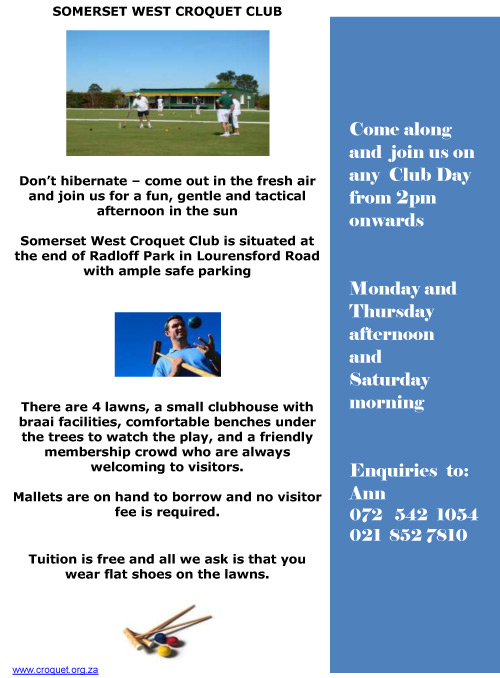 Tucked away in a quiet corner of Radloff Park (Lourensford Road) under the mountains and in view of the vineyards is one of the best kept secrets in Somerset West! This is the Somerset West Croquet Club which has four lawns and rustic clubhouse.

Croquet (in its form of golf croquet and association croquet) is a game for young and old alike, played with great enthusiasm worldwide. So do you enjoy snooker, ball games, good company and pleasant venue then do visit us any Monday, Thursday (2pm onwards) or Saturday (mornings) – these are our social club days.

The club has a braai area under the vines alongside the clubhouse. We have a full summer fixture list incorporating inter-club, provincial and national tournaments.

(Thanks to Peter Millson, past President of SWCC, for this article)

Croquet in Somerset West in the early days was purely a social affair with many of the large houses in the area having private lawns albeit some smaller than standard. Some of the grander places like Vergelegen, owned by Cynthia Johnson, even had tea arrive on silver trays courtside at four o’clock!

From a nucleus of the original players, George & Lesley James, Jack & Jemima Benn, Brig. & Lady Elizabeth Tyler, Cmdr & Mrs Gray (Yi & Joan), Lady Kenmare, Elizabeth Fraser, Madge Francis, Maureen Duffus decided to start the club in 1979 and persuaded the Municipality to build two lawns in Radloff Park.
George James was the original Chairman and the Countess Kenmare President. There was much committee discussion as to whether the members would wear R2.50 as an annual membership fee!

Golf Croquet being just a ‘fill-in’ game after a ‘proper game’ of Association, these babes (and they were little more) started straight in on Association and were soon leading lights in the game both locally, nationally and internationally. Indeed they were South Africa’s Croquet wunderkinder.

The club grew in strength over the years with competitive play against the other Cape clubs but did not grow in numbers until Golf Croquet was introduced by Peter Heydorn who had seen the potential of this form of the Game when he was over in Australia winning medals for his Association Croquet.
As numbers grew because of this, another lawn was added mainly through the efforts of Jack Benn and lately the club-house has been enlarged and a fourth added.
This club is now strong in depth with members and attracting more, trying to popularise Association Croquet as well as entering a programme to introduce the game to those who have never had the luck or opportunity to play Croquet before. But today, tea is served on plastic trays and the only silverware is in the trophy cabinet. 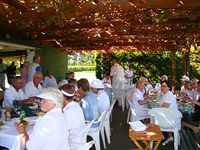 SWCC is proud to have among its members Judith Hanekom who was the 2015 World Ladies Golf Croquet Champion. Reg Bamford, a past member now resident in England, is not only the world champion in Golf Croquet but also Association Croquet. Another member, William Louw (now transferred to Rondebosch Club) has also represented South Africa internationally. Yet another member, Peter Johnson, was the national singles champion recently and the holder of 4 trophies that year. This establishes the standard achieved in this game at SWCC.

With a membership of 70 there is a good mix of players of all capabilities and those too who just like social play.

Croquet can be many things to many people competitive or otherwise. It is a sport that carries no injuries but engages both physical and mental activity to keep things lively and interesting. All you need are flat shoes and a club mallet to get started – coaching is free.

A game can be completed in 45 minutes. Croquet clubs generally are very sociable environments which cater to the competitive and non-competitive player. Contact: Ann 072 542 1054 or 021 852 7810